Sammy and the Sewer by Natalie M. Weston 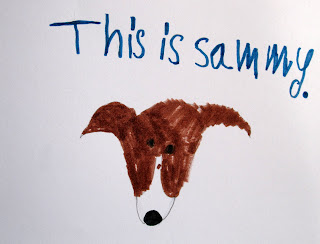 Chapter 1: The Hole
Once upon a time, there was a dog named Sammy. And Sammy loved to catch gophers. One day, Sammy found a mysterious round hole. The hole had no dirt around it, so Sammy put some there. On his third load, Sammy got too close and fell into the hole. "Help!" Sammy barked.

Chapter 3: The Ocean
"Rats!" thought Sammy. "How will I ever get home now?"
Suddenly he spotted a female rat close by.
"Excuse me," he said. "Do you know the way out of here?"
"Of course I do," she said. "Every sewer rat knows that."
"Sewer?" asked Sammy. "Nobody ever told me this was the sewer!"
"Yes," said the female rat. "This is the sewer, and anyway, the exit is that way." She pointed to a small hole.
"Thank you," said Sammy.
"You're welcome," she said. "But you'll have to swim."
"Why?" asked Sammy.
"Because the ocean is on the other side," she explained.
"Oh," Sammy said.

Chapter 4: Home at Last
In the ocean, Sammy swam through the current, his breath held tight. At last he reached land. Then he climbed out of the water and shook himself. "Finally!" he thought, breathing fresh air. "Now all I have to do is sniff my way home." So he sniffed here and he sniffed there and soon he reached his home where he belonged. Then he raced through the doggie door into the living room and out the screen door and barked, "Home at last!" Then he caught all the gophers he wanted. 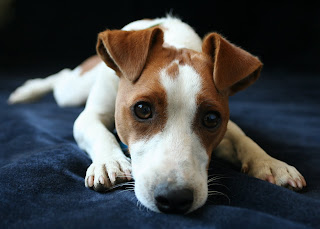 Sammy--the inspiration behind the book.
Posted by Janine Weston at 11:05 AM