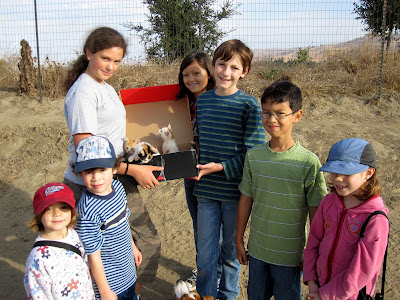 Today was our first Bayside 4-H Hiking project meeting at the Alameda Creek Trail and boy, what an adventure we had!

We were walking down the trail and all of a sudden, we spotted a small orange kitten sitting at the side of the trail. Then, we noticed there were three more kittens on the other side of the fence! There was 1 more orange kitten, 1 white and orange and 1 calico. They were mewing and did not have a mother cat with them.

One of our brave project members climbed over the fence alongside the trail and caught the kittens. We bundled the kittens in our sweaters and jackets and carried them across the concrete bridge toward some apartments. 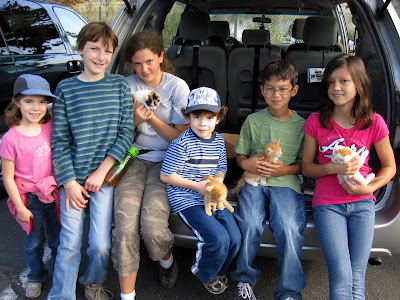 Then we asked a man for a cardboard box to put the kittens in.

We finished our hike while taking turns carrying a box full of kittens.

When we got to the parkinglot, we took the kittens out of the box for some air.


The project members said goodbye to each kitten and then we took them to a neighbor who volunteers for Purrfect Cat Rescue. 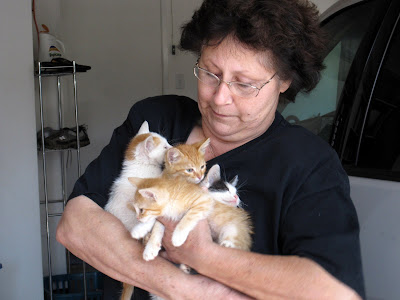 Our neighbor examined the kittens and told us that they were not ferral, but must have been dumped at the park. She noticed that the kittens had fleas and would need baths. She said that because they had such cute markings, they would be easy to adopt. 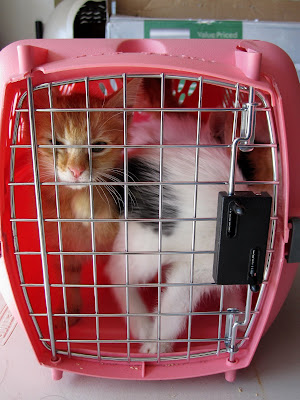 The kittens were eager to get out of the temporary crate we put them in. They were pawing and biting at the door! 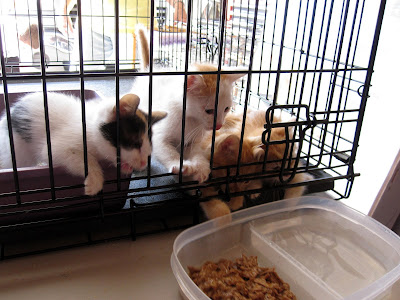 Our neighbor set up a larger crate and prepared food and water for the kittens. They must have been starving! 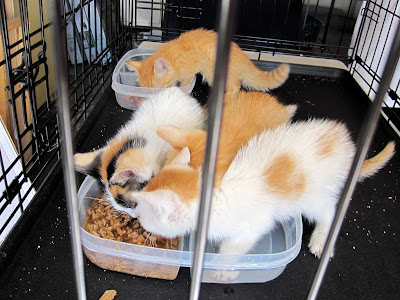 The kittens were so eager to eat and drink that they even climbed into the bowls.

We are glad that we helped to rescue these adorable kittens. We donated money to Purrfect Cat Rescue to pay for food and spaying/neutering. We hope that you will, too!

You can make a donation online to help these kittens at:
http://www.purrfectcatrescue.org/donate.html