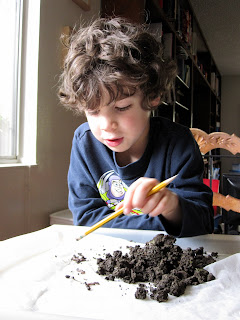 Max:
"Today, we went on an earthworm hunt. We used trowels and containers to collect the earthworms. We went into the garden to dig for them. We didn't need to dig very deep before we found some. I found 5 and Natalie found 6 or 7."

"Next, we brought them into the house and dumped them onto a wet paper towel so that they wouldn't dry out and then we used magnifiers to look at their body parts." 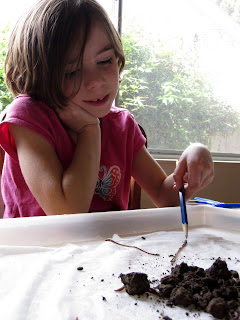 Natalie:
"We learned that earthworms are invertebrates and that adult earthworms have a clitellum so that they can reproduce and lay eggs that hatch into tiny worms. An earthworm's body is divided into lots of segments. The bristles on the segments help them to move in the dirt; earthworms can move both backwards and forwards."

"Earthworms eat decaying plant matter and turn it into rich soil with their waste, called castings." 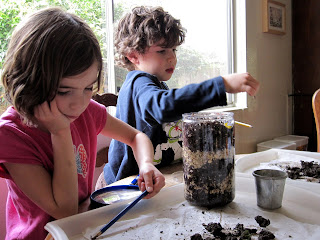 Max:
"Then, we made a worm farm. To make the farm, we layered dirt, sand, oatmeal, and water inside a tall plastic bottle. We named it The Worms of Ordinary Farm."

Natalie:
"Last, we covered the bottle with black paper so that the earthworms would think they are under the ground. In a few days we will take off the paper to see if the worms pushed the soil around." 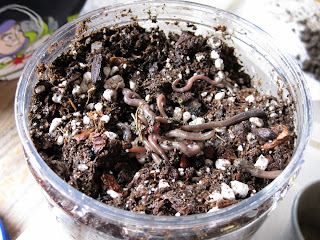 We got the idea and materials for this activity from Delta Education's Science-In-a-Nutshell Living Things Cluster that we ordered with our Connecting Waters Charter School educational funds.

Posted by Janine Weston at 5:18 PM