Natural Science Adventures for Homeschoolers: Too Many Legs! 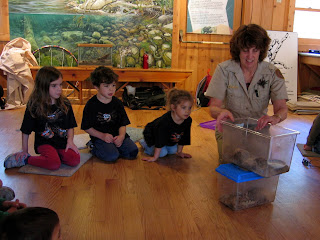 Today we made our way out to Sunol Regional Wilderness to attend the first of four monthly sessions in a fall series of Natural Science Adventures for Homeschoolers. Today's topic was "Too Many Legs!" a spider exploration.

First we went around the room introducing ourselves and mentioning tidbits of information on spiders, while dispelling rumors and admitting fears. 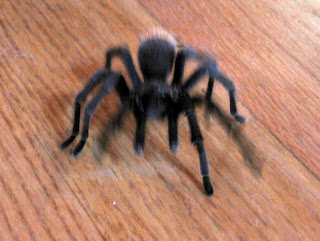 Next, our naturalist, Katie Colbert, introduced us to two of the visitor center residents, tarantulas, Harry and Harriett. The two tarantulas were allowed to walk around in the people circle we had formed. 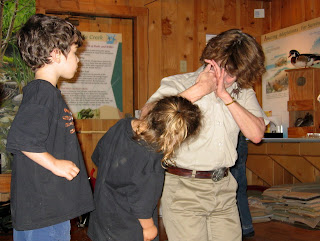 In preparation for passing Harry around to the braver souls, Katie collected Harriet in her hands and slowly walked over to her box. When she bent down to place the spider in the box, Harriet was gone! Startled, Katie asked us if we had seen her crawl away. As we had not seen her drop to the ground, we guessed that the spider must be crawling around on Katie. Katie turned around a few times...no spider. It was then that we assumed the worst... Could it be inside her shirt? 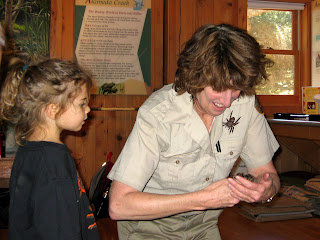 It turned out that in only a few short seconds, Harriet had managed to crawl into Katie's button-down uniform shirt! The kids were shocked and amazed when she came crawling out, back into Katie's hands!

After everyone calmed down, it was time to pass Harry around the circle. Those who were brave enough to allow him to crawl across their hands were afforded the opportunity! Natalie, Madeline, and I took the challenge! Max watched.

Following all of the spider excitement, we went down to the dry creek bed to look for spiders of our own. On our spider hunt, we used acrylic bug boxes with magnifier lids for observation purposes. The kids enjoyed looking underneath rocks for the speedy little creatures, and we found many Wolf Spiders hiding in the cracks and crevices.

As our adventure came to an end, we released our captive pets and spent the remaining time using spray bottles to mist the webs along the trail that took us back to the visitor's center.

Before we left, Katie made sure to show us two Black Widow Spiders so that the kids and parents would be better able to identify the common and highly poisonous California species.

For me, it was interesting to see how my children's personalities are manifested in their reactions to potentially fearful things. Madeline, is no doubt, the most fearless of my three kids when it comes to taking action. Natalie has a willing and cooperative, yet timid soul. Max steers clear of discomfort, but loves to read all about it in books!

Can't wait until our next class in October!

Posted by Janine Weston at 8:30 PM

How fun! You guys sure do know how to have a good time. =o) Love it.