The Tree that Wouldn't Move... 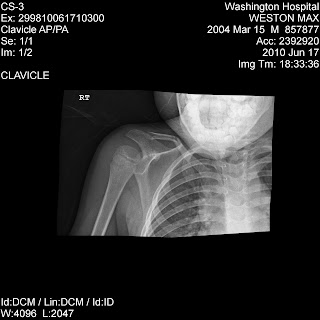 Once upon a time, on a warm summer afternoon, a boy named Max was playing at the park with his sisters and friends from church. They were getting along exceptionally well and having a great time together.

Some time later, several more children arrived and they decided to play "war tag." Max was amazed that there were other kids that wanted to play the tough-guy types of games that he absolutely loves! There is actually nothing wrong with war tag, but when you're racing next to a boy who is your same age but twice your size and you suddenly find yourself in between that boy and a tree, sometimes you won't have enough clearance to get by...and, the tree won't move.

Max, hit that tree and fell down and came running to his mommy with tears in his eyes saying, "Ouch, Mom! My arm hurts!" Max's mommy declared it was time to go and she quickly gathered up his sisters and they departed for the short walk home. In route, she questioned Max about what happened and did some mobility tests to try to determine exactly which part of his arm was injured.

At home, Max's mommy used a pair of scissors to cut off his t-shirt and examine his arm more closely. A small bump along Max's right clavicle alterted her that there might be a broken bone, so she carefully used her fingers to first feel the uninjured bone and then make a comparrison along the injured side. She guessed that Max had broken his clavicle and explained to Max that they would need to go to the doctor for an x-ray and a sling.

"No!" shouted Max, "I'm not going anywhere! It doesn't even hurt anymore! I don't want an x-ray!" But the tears and the way Max held his arm against his side indicated otherwise.

Max agreed that photographs were painless, but was still not convinced that he should make a trip to the doctor. Max's mommy packed up some snacks, a button-down shirt for Max, books to read, and his two sisters, and off to the Emergency Room they all went.

Fortunately, it was quiet in the ER that Thursday evening and Max had to wait merely 5-minutes before he was called back. Just as suspected, the ER doctor wanted to take an x-ray of Max's clavicle, but not before Max had had a powerful dose of pain medication.

Once in the x-ray room, the technician asked Max to lay down on the table and proceeded to raise the table up toward a huge machine on the ceiling. Max was not at all thrilled and proclaimed, "I want to get down!" as he started rolling toward the edge. The technician informed Max's mommy that Max would need to hold still for the x-ray. Max's mommy asked the technician what sort of approach they might need to take if Max didn't lay still. "A tranquilizer injection you say? With a big needle?" That's about all it took! Max decided he could lay still on the x-ray table after all. Max's mommy smiled. The x-ray pictured above turned out great!

Sure enough, Max's right clavicle was broken. About that time, Max's daddy arrived to admire the x-ray. A sling was ordered and fitted. Pain medication was prescribed. And the family went out to dinner and lived happily ever after.

Six days later, Max had a re-check with an orthopedist (bone doctor), who took the lovely x-ray below and reported, "Wow! His bone should be healed by the time you make it out to the car--kids' bodies repair themselves so quickly!" And Max was thrilled to learn that he didn't need to wear a sling anymore. The End.

Moral: Trees don't move. And if you're going to break a bone, do it while you're young. :) 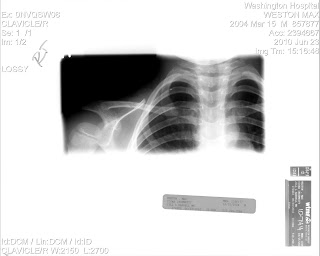 Posted by Janine Weston at 9:01 PM